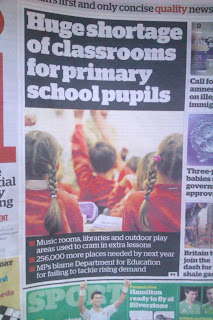 http://news.sky.com/story/1109049/school-shortage-crisis-could-harm-education
A crisis is looming in primary schools across England with predictions there will be a shortage of 250,000 classroom places in the coming school year.
In the rush to provide enough school places, local councils may have to make decisions that affect the quality of pupils' education, according to a new report by the Commons Public Accounts Committee (PAC).
In areas facing a squeeze on places, and a lack of space, buildings such as libraries or music rooms could be turned into classrooms to meet the demand, it says.
The committee is the latest group to raise concerns about a lack of school places.
In March, a study by the National Audit Office (NAO) warned that by September 2014, an estimated extra 256,000 primary and secondary school places will be needed to meet demand.
Of these, 240,000 are required in primary schools, with more than a third (37%) needed in London alone.
The Department for Education has said it is spending £5bn by 2015 on creating new school places, and that it expects 190,000 extra places will have been created by September.
In its report, the PAC suggests there has been "little oversight" of the impact decisions on how to create new places would have on children's education.
"In the rush to deliver sufficient places, authorities may have to make decisions that affect the quality of education on offer," it says.
"For example, in areas where there is pressure on school places and a shortage of suitable land, authorities may have to convert communal spaces and specialist areas (such as libraries or music rooms) into classrooms.
"Some authorities may have no choice but to expand poorly performing schools, if places are required in that area."
The report criticises the Government for failing to fully understand "the risks to children's learning and development that may arise as authorities strain the sinews of the school estate to deliver enough places".
It warns that the need to increase the number of school places should not be done at the expense of quality.
The report says that the DfE does not know whether it is achieving value for money with the funding it provides to create new places, and suggests the department was "slow to respond to the rising demand for school places".
But the DfE has improved the way it targets money to areas where it is needed, the report adds.
It goes on to say that councils are not responsible for academies and free schools as they fall under the DfE's remit, and that local authorities must have "mature discussions" with everyone, including these schools on how to meet demand for places.
Publicada por João André à(s) 10:13